Will the UK ever meet its housebuilding targets?

Housing Minister Brandon Lewis reignited the discussion over housebuilding targets this September by making the bold claim that one million more houses will be built by 2020, coinciding with the predicted £1 million price tag for an average London property in the same year. Ministers have come under increased pressure to step up housebuilding efforts following record-low figures since 2010 and this latest admission is a step in the right direction, however, is this latest target realistic? 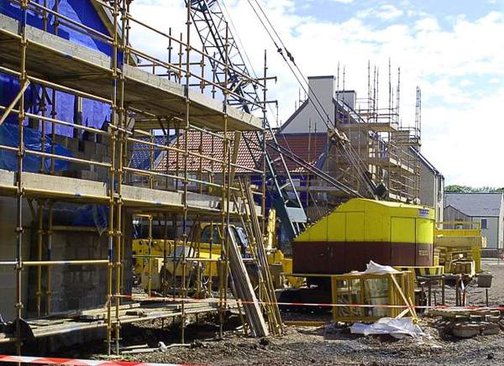 Since 2009 to 2010, housebuilding completions have dropped below 200,000 a year, despite increasing demand. Ten years ago, the Barker Review of Housing Supply suggested that around 250,000 homes need to be built every year to avoid spiralling house prices and a shortage. In the Conservative 2015 manifesto, the party pledged to build 275,000 affordable homes by 2020; 200,000 starter homes; and funding for housing zones, which will create 95,000 new homes, a total of 570,000 homes: 430,000 homes short of their revised one million plan and 680,000 houses short of what the Barker Review suggested.

As you can see from the graph below, local authority housing - which played a crucial part in post-war recovery - dropped significantly between 1970 to 1974, regained health between 1975 to 1978, then dropped to near zero during the 90s. A heavy reliance on private enterprise - 70%–90% of all housing completions per year for the past twenty years - has led to a margin over volume market that is dominated by the wealthiest commercial development companies. In short, council spending restrictions and a lack of investment have resulted in fewer houses being built. 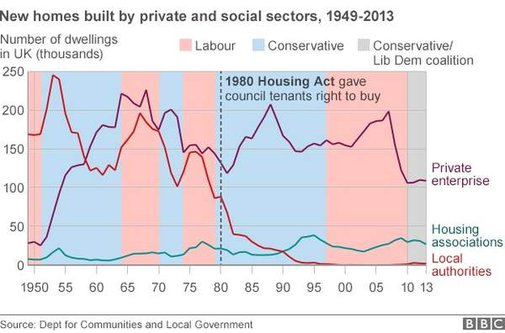 Land issues, including developers sitting on undeveloped, profitable land; a lack of available land; and the tedious and long-winded planning permission process, have all contributed to today’s shortage.

Finally, a materials shortage has elevated the price of building a home dramatically, and a UK skills shortage in construction has created an unstable industry since the recession in 2008.

The government has announced that it will scrap developers’ requirements to build affordable, rented homes to prompt the completion of 200,000 starter homes by 2020, all of which will be priced 20% below market value.

The Housing and Planning Bill is being passed through Parliament, which will extend the Right to Buy scheme, funding by the sale of high-value council homes. The Bill outlines authority planning permission timeframes to make the self-build process quicker and easier, with a planning overhaul that should simplify the current, archaic system.

Assessed brownfield sites across the UK have been made available, and Transport of London and the Greater London Authority are building and investing in thousands of new homes and new developments across the capital.

George Osborne has also announced that local councils will be able to retain money from local business rates: around £26 billion in total, and has said that councils will decide how to spend the money. Stating that the Conservatives are the party of builders, Osborne has made a progressive step within his devolution plan that was pledged during the election campaign.

Will the measures work?

Sky-high property prices are now part and parcel of London’s reputation. The low supply, high demand market has benefitted the economy by driving up prices, to the point of heavy reliance, but this is simply not sustainable.

Steps have been made in the right direction, for example freeing up money for councils around the UK to spend as they please and the release of brownfield sites. However, other policies, notably Right to Buy may simply rely on the UKs existing housing stock to shift generation rent to generation buy, whilst neglected the need to replace the social housing that has been sold off.

The most important factor that will make a real difference to the number of completed homes is the year 2020, i.e. the next election year. Brandon Lewis’ statement may have set this government one of the biggest challenges of this term, as they will be vilified in the election campaign if the target is missed. Pure ambition by a handful of ministers may be the catalyst that the UK needs for real results over the next five years.

LD Events offer a competitive advantage to thousands of UK and international property professionals and investors through high-level market insights, networking opportunities and industry analysis. Contact us to book a place at an upcoming event.